Tanzanian President Jakaya Kikwete is seen during a meeting with the Swedish king at the Stockholm Palace, during his visit in Sweden June 4, 2015. REUTERS/Bertil Ericson/ TT News Agency

The International Press Institute (IPI) today welcomed a decision by Tanzanian lawmakers to heed demands from media groups and withdraw two proposed acts that purported to strengthen free expression and access to information but would instead undermine those rights as the country approaches fall elections.

“We are happy that the government has listened to the serious concerns raised about these two acts and pulled them from consideration,” IPI Director of Advocacy and Communications Steven M. Ellis said. “Before moving forward, we urge lawmakers to revise these bills to ensure that they contain adequate safeguards protecting freedom of expression, and the right to share and receive information.”

If adopted in its current form, the Access to Information Act would mandate a minimum 15-year prison sentence for any government officials who released information that was subject to a number of overly broad and vaguely defined exemptions. Those exemptions include disclosures that are “not justified in the public interest”, that “infringe commercial interests” or that “significantly undermine the operations of the Tanzania Broadcasting Association”.

Critics of the proposed Act said the possibility of prison sentences had the potential to generate fear and create an excuse for officials not to provide information.

The Act also attached a minimum, five-year prison sentence to the offence of publically sharing information received from an “information holder” — a public authority or private organisation that receives public funds or possesses information related to public health, the environment, human rights, or illegal activities.

The bill would further allow such “information holders” to demand fees and would not prohibit officials from refusing to provide requested information. Finally, the Act would not allow courts to substitute fines for prison sentences, which critics said could enable those who wish to silence journalists to use the threat of imprisonment to do so.

The Media Services Act would create a government-controlled media council that would oversee all publishers, from major news outlets to bloggers’ sites. The media council would have the right to ban newspapers and to prohibit any non-accredited journalists from publishing.

Local news sources reported that the acting chairman of the Media Owners Association of Tanzania, Reginald Mengi, voiced concerns at a meeting of the Association in May that the bills would gravely damage the practice of journalism

“These are not developmental laws,” Mengi said. “They are aimed at denying our citizens their basic right to freedom of expression.”

The manager of regulation and standards for the Media Council of Tanzania, Pili Mtambalike, told IPI that she celebrated the decision not to approve the Acts during this session of Parliament.

“We were able to block it from being passed, but we are not sure when the government will bring it up again,” she said. “The hope is that it will be completely overhauled before it is brought up again.”

Observers had found the proposed legislation especially dismaying in light of President Jakaya Kikwete’s participation in the Open Government Partnership, a global initiative to promote transparency in government. Kikwete had said in May that he would sign both Acts if they reached his desk.

Despite media groups’ success in halting passage of the Acts, media freedom in Tanzania suffered a blow earlier this year when Parliament passed two other pieces of legislation that could significantly hamper Tanzanian media outlets and weaken freedom of expression. Lawmakers approved the Statistics Act on March 27 and the Cybercrimes Act on April 1, and Kikwete signed both into law, according to a press statement released in May.

The Statistics Act establishes harsh punishments for publishing misleading and inaccurate statistics, or statistics that the National Statistics Bureau has not approved. The Cybercrimes Act, passed in the middle of the night, imposes draconian fines and lengthy prison sentences for publishing misleading or false information, and for sending unsolicited computer messages. It could also prevent journalists from publishing information received from whistleblowers, insofar as it makes it an offence to obtain computer data protected against unauthorized access without permission.

As bills, both were subject to a special rush order, and media organisations and the public were not able to discuss the bills before Parliament passed them.

Tom Mshindi, editor-in-chief of the East and Central African media conglomerate Nation Media Group, shared his concerns about the Cybercrimes and Statistics Acts with IPI.

“They will make it difficult for journalists to operate with freedom,” he said. “There was pushback, and we do hope that there will be some reconsideration.”

In October, Tanzanians will elect a president, members of parliament and local government officials. The Chama Cha Mapinduzi Party has held power for the past 50 years, but its members face unusually powerful challengers this year following a decision by the main opposition parties to merge into one party, Ukawa.

Critics at Policy Forum, an organisation dedicated to promoting public involvement in policy decisions, and at Tanzania’s Legal and Human Rights Centre have voiced apprehension that the Cybercrimes and Statistics Acts will impair the democratic process ahead of the elections.

“It’s a time when a lot of information is shared,” Mshindi said. “[These acts] mean [Tanzanians] can’t do that unless the government and the ruling party clear it. There is the possibility of some mischief.”

Mshindi also noted that while Tanzanians are making increased use of social media to convey information about candidates and their policies, the Cybercrimes act will impede them from sharing information freely online.

“Inherently it’s supposed to deter people from even trying,” he said.

IPI today said that it supported calls for Parliament to make reforms to those Acts and it emphasised the role that media freedom plays in conducting fair and democratic elections.

“As the government and lawmakers work to improve the Access to Information and Media Services Acts, we hope they will also take steps to bring the Cybercrimes and Statistics Acts into line with international standards in order to ensure that Tanzania’s people have the information they need to make informed decisions about their future,” Ellis said. 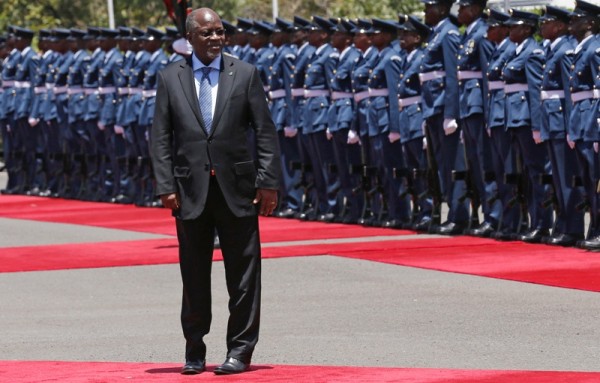 Tanzania bans yet another newspaper